Responses from the latest survey of around 3,000 businesses in the UK, using the Bank of England's Decision Maker Panel (Bank of England 2018),1 give us four key findings about the level and impact of Brexit uncertainty.

Brexit is a major and growing source of uncertainty for firms

Successive waves of this question have shown that firms continue to place Brexit high on the list of sources of uncertainty. The share of firms responding that Brexit was one of the top drivers of uncertainty rose from 35% in August 2016 to almost 40% in August-October 2017, while the share of companies considering Brexit not important in the same period fell from 27% to 16%. The proportion of firms reporting uncertainty has remained high and has increased further – Brexit uncertainty has not been resolved. By August-October of this year, around the time of the Salzburg summit, around half of firms were reporting Brexit as a top-three source of uncertainty.

Figure 1 Brexit as a source of uncertainty 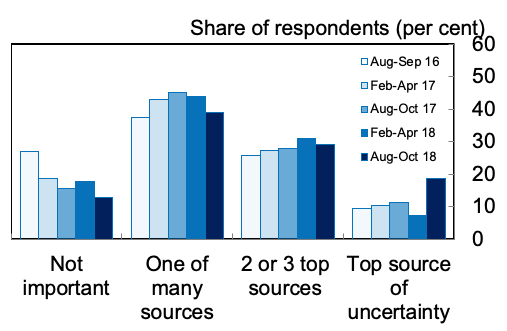 Figure 2 shows the effects that companies expect Brexit to have on their sales, exports and costs. Companies place more weight on Brexit reducing sales than on it increasing them. On average, businesses expected Brexit to eventually reduce their sales by around 2.5% (Figure 2). There was also a net negative expected effect on exports, while unit costs, labour costs and financing costs were expected to increase. 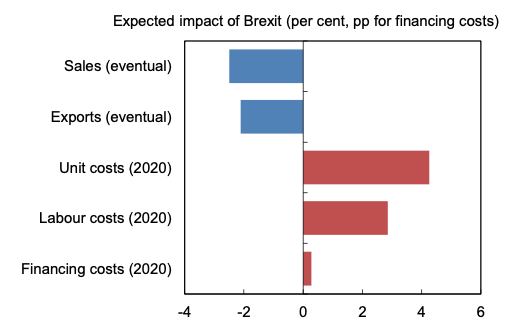 To estimate the impact of Brexit uncertainty, we analysed the change in investment and employment for firms exposed to lower and higher levels of uncertainty. This difference-in-difference approach quantifies the effect that Brexit uncertainty has had on growth of investment and employment by firms. Our results show the uncertainty is associated with around 6 percentage points less investment. This reduction in investment appears to have happened mainly in the first year after the referendum, between July 2016 and June 2017. We also found that that there is 1.5 percentage points lower employment for these firms, with the effect being larger in the second year after Brexit (July 2017 and June 2018) than in the first.

Firms in the UK economy that export more to the EU, import more materials from the EU, and employ more labour from the EU were most uncertain and expected Brexit to eventually have a more adverse effect on their sales. They are also the firms that have the highest levels of productivity. We see from Figure 3 that more productive firms expect the eventual effect of Brexit on sales to be more negative (compared to the expected effect of less productive firms).

Figure 3 Expected eventual impact of Brexit on sales versus productivity 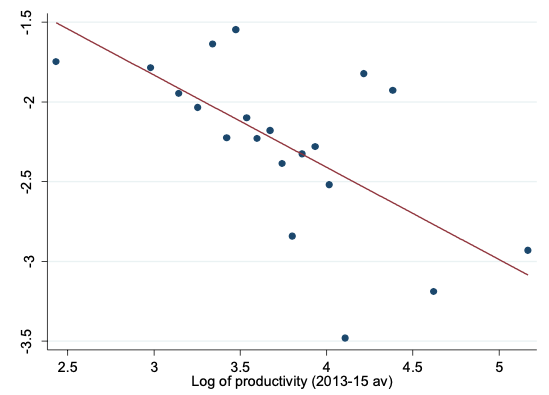 Brexit has not happened yet, and when it does, in March 2019, there could be further uncertainty over the transition arrangements and the arrangements that replace the negotiated settlement. This could lead to further employment, investment and productivity losses in the UK if policy is uncertain or increases trade costs.

Equally, there could be a Brexit dividend (a relief factor that conditions are not as bad as feared), and some postponed investment could be implemented if the conditions under which the UK trades with the EU warrant it. For this reason, it is essential to continue to monitor the effects of Brexit uncertainty on businesses. The effects could go either way.

Authors’ note: Bloom and Mizen have received £683,636 in the form of an ESRC standard grant for “Measuring the Impact of Brexit on UK Investment, Productivity, Sales and Employment”. The funding will support an online survey and research into the impact of Brexit on the UK for three years, 1 Sept 2017 – 31 August 2020. The project is carried out with the collaboration of Bank of England, the Universities of Nottingham (UK) and Stanford (US).