US college enrolment varies substantially by income and race. In 2016, 83% of students from high-income families enrolled in college immediately after graduating from high school, compared to only 67% of students from low-income families (McFarland 2018). Over 70% of white high-school graduates immediately enrol in college, compared to 56% of black high-school graduates. When low-income and underrepresented minority students enrol in college, they are disproportionately likely to do so at colleges with relatively low graduation rates and expected earnings, such as two-year community colleges. One explanation of such disparities comes from complexities in the transition to college, which disproportionately impact students who lack the resources or guidance to navigate college processes as effectively as their more advantaged peers (Page and Scott-Clayton 2016).

College entrance exams such as the SAT and ACT are one source of complexity. Some students do not take such exams at all, due to underestimation of their own college readiness, financial or psychological costs, or poor information about the exams’ role in admissions. States mandating such exams as part of accountability systems have not only increased exam-taking ratesbut have meaningfully improved their students’ four-year college enrolment rates and the selectivity of colleges chosen, particularly for underrepresented minoritystudents (Klasik 2013, Hurwitz et al. 2015, Goodman 2016, Hyman 2017). This research suggests both that some students underestimate their college readiness and that relatively small costs can dissuade such students from taking college entrance exams.

Although much has been written about the impact of taking a college entrance exam for the first time, we know little about students’ decisions to retake such exams. Our research uses data on over 10 million SAT takers from the high school classes of 2006-2014, both to document predictors of retaking, and, more importantly, to provide the first causal estimates of the impact of retaking on college enrolment (Goodman et al. 2018). We first show that that nearly half of SAT takers never retake the exam. Those who do not retake appear at a competitive disadvantage, given that retaking is strongly incentivised by current admissions practices of US colleges. Nearly 75% of four-year colleges that use SAT scores in the admissions process publicly claim to consider only a student’s maximum score. For most colleges, retaking can only improve students’ chances of being admitted by making their applications more competitive.

We then estimate the causal impact of retaking on admissions-relevant test scores and college enrolment. To do so, we need to account for the fact that re-takers likely to differ from non-re-takers in numerous ways. Re-takers may be more motivated or better informed about the benefits of retaking, making it hard to separate the impact of retaking from these other factors. To deal with this challenge, we borrow from behavioural economics and psychology literature that observes people focusing disproportionately on the first, leftmost digits of numbers when making decisions. A ‘left-digit bias’ has been shown to operate in carand housing sales (Busse et al. 2013, Lacetera et al. 2012) and in athletic performance (Allen et al. 2017, Foellmi et al. 2016). We apply this observation to test-taking data, extending earlier work by Pope and Simonsohn (2011), and show that students with first SAT scores just below a multiple of 100 are noticeably more likely to retake the SAT than students with scores just at or above that number. As seen in Figure 1, discontinuities in retaking rates appear at almost all multiples of 100, ranging in magnitude from 0.5 percentage points at lower thresholds to 12 percentage points for the highest threshold. 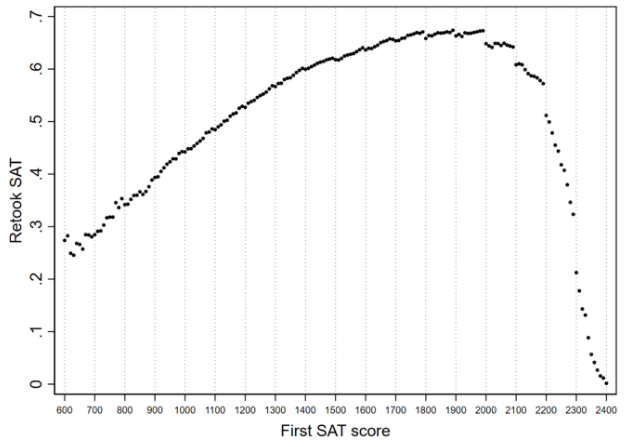 Notes: Shown above are average SAT retaking rates as a function of students’ first SAT scores. The sample consists of all SAT-takers from the high-school classes of 2006-14 with valid math, reading, and writing scores, and who took their first SAT by November of senior year.

That students appear to have round number target scores is not surprising. The top two results from a Google search for “should I retake the SAT?” lead to web pages that advise: “you should have an exact target score in mind” and “having a concrete score in mind can be a powerful motivator”. Students’ focus on round-number thresholds may arise from irrational left-digit bias. It could also be a rational response to the perceived left-digit bias of admissions or financial aid processes, which may explicitly use round number thresholds to determine eligibilityor implicitly overweight scores’ first digits due to the mental processes of admissions officers with heavy workloads (Bowman and Bastedo 2017).

Given that students just below and above these round-number thresholds are nearly identical to start, these thresholds create the equivalent of an experiment in who retakes the SAT. We compare the final SAT scores and college outcomes of students on either side of these thresholds – that is, students who start out similarly but differ only in their retaking behaviour.

We find that the impact of retaking on SAT scores is substantial. Retaking once improves students’ admissions-relevant superscores1 by nearly 0.3 standard deviations (90 points on a 2,400-point scale). For students who initially scorein the lower half of the SAT distribution, retaking once boosts superscoresby nearly 0.4 standard deviations (120 points on a 2400-point scale). Higher-scoring students see meaningful but smaller test score gains. Retaking increases the SAT scores of low-income and underrepresented minoritystudents by more than it does for their counterparts who were high income and not an underrepresented minority. Our estimates imply that raising the retake rate of low-income students to that of high-income students would close up to 9% of the admissions-relevant SAT-score gap by income. Equalising retake rates by race would close between 3–4% of the gap in SAT scores between underrepresented-minority and white students.

The score increases resulting from retaking are large enough to drive substantial improvements in college enrolment outcomes. On average, retaking increases the probability of enrolling in a four-year college by 13 percentage points, driven in large part by substitution away from two-year colleges. Retaking causes students to enrol in colleges with historical bachelor-degree completion rates six percentage points higher than those of the colleges they would otherwise have enrolled in.In particular, retaking shifts enrolment away from non-selective, low-completion-rate colleges to somewhat more selective, higher-completion-rate four-year colleges. Enrolment in the most selective colleges, with graduation rates above 80%, does not change. Because it does not alter application patterns to the colleges where enrolment shifts are observed, retaking most likely changes college choices by increasing the odds of admission through increased SAT scores.

Our results suggest that individual students, particularly low-scoring, low-income, or underrepresented minority students, should likely retake college entrance exams more than they currently do. Though our data is too recent to measure re-takers’ college completion rates with precision, evidence from other contexts suggests the shift from two-year to four-year colleges and the general improvement in quality of college chosen will lead to higher degree-completion rates (Goodman et al. 2017, Cohodes and Goodman 2014) and higher labour market earnings (Zimmerman 2014, Canaan and Mouganie 2018).

These results suggest that students underestimate or undervalue these expected benefits compared to the relatively small costs of retaking, which include a few hours of test-taking time, study effort, and a fee that ranges from $0 for low-income students who qualify for a fee waiver that renders the first two takes free, to about $50–$60 for higher-income students. The retaking of college entrance exams may be ripe for the type of behavioural intervention that has generated interest in public policy in general (Chetty 2015), and in education policy specifically (Lavecchia et al. 2016, Levitt et al. 2016). In the full research paper, we discuss a variety of potential interventions in the conclusion. We argue that encouraging or requiring students to take their first exam earlier might be particularly effective, given that many low-income and underrepresented minority students do so in 12th grade when few retaking opportunities remain.

Canaan, S, and P Mouganie (2018), “Returns to education quality for low-skilled students: Evidence from a discontinuity”, Journal of Labor Economics.

Hyman, J (2017), “ACT for all: The effect of mandatory college entrance exams on postsecondary attainment and choice”, Education Finance and Policy 12: 281–311.

McFarland, J, and B Hussar (2018), “The condition of education 2018”, National Center for Education Statistics.

[1] Superscores are a student’s best section-level scores across all the times the exams were taken.