Broad literatures in economics, psychology, political science, and sociology document that norms embody a shared understanding of what is acceptable (e.g. Fehr and Schurtenberger 2018, Cialdini and Goldstein 2004, Crawford and Ostrom 1995, Bendor and Swistak 2001). Norms might therefore enable collective behaviour among a decentralised group of individuals, even without any explicit coordination or formal institutions.

This mechanism may guide group behaviours in any setting with meaningful social interaction. This makes labour markets a particularly relevant domain – most labour arrangements involve repeated inter-personal interaction among workers. Consistent with this, collective behaviours – mass walkouts with foregone wages, punishment of rate busters, and productivity compression – have been documented across history and contexts, even without formal unions (Clark 1984, Clark 1987). Social norms could help sustain such behaviour.

Enforcing collective action through social norms and social sanctions may be particularly relevant in poor countries, where local social networks are often key in risk sharing and information diffusion.  These high levels of social capital make it more likely that norms arise and can be sustained effectively through the threat of punishment, for example, by withholding information about job opportunities.

In a recent paper (Breza et al. 2019), we use two experimental exercises to test whether social norms shape aggregate labour supply in informal markets for casual daily agricultural labour in India. Despite a lack of formal coordination (e.g. Rosenzweig 1988), such labour markets have downwardly rigid wages and high unemployment in the lean season.

We hypothesise that, in our setting, there is a norm against accepting jobs below the prevailing wage that dampens workers’ labour supply, and that workers are sanctioned for accepting below-prevailing wage job offers.

Exercise 1: Will workers take up jobs at and below the prevailing wage, in public and in private?

We partner with existing employers to make job offers for typical agricultural work to workers in their respective local labour markets (villages). Job offers follow usual hiring practices. In all offers, employers describe the task and the work hours, before turning the conversation to the survey staff, who then reveal the wage rate for the job.

The practice of making job offers on the street or inside the home are both common in this context.

Workers take pay cuts in private, but not in public

Workers are considered to have accepted the job offer if they come to work for the full duration. Results from 502 workers across 183 villages show that at the prevailing wage, the average take-up rate for the job is 26%, with no detectable differences across the observability conditions. These three treatment arms serve as placebo tests that observability alone (in the absence of norm violations) does not affect job acceptance directly.

In contrast, when a worker is offered a job below the prevailing wage, take-up varies widely depending on whether his decision is observable to other workers. When the worker is offered a wage cut in private, his probability of take-up remains a robust 18%. However, his willingness to accept a wage cut falls by 13.6 percentage points (78%) when offers are observable to other laborers. The presence of the employer (relative to complete privacy) does not significantly affect participants’ behaviour. 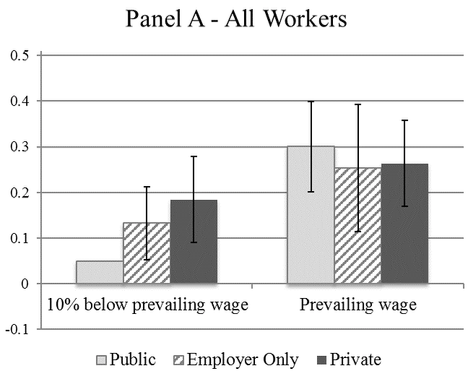 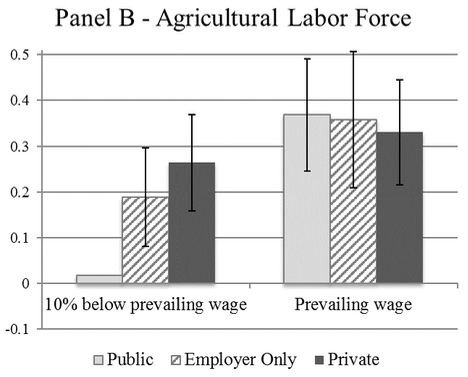 Notes: These figures graph take-up rates for the job offer under each of the six treatment arms. The take-up rate for the job is defined as attendance on the day of work. Panel A uses the entire sample (N=502 participants); Panel B restricts the sample to casual daily wage workers (N=363 participants), who report their primary or secondary occupation to be agricultural labour. All robust 90% CIs are constructed using standard errors (clustered at the village-level) from a test of the difference between the take-up rate in that treatment arm and the take-up rate for the public job offers at 10% below the prevailing wage.

A rich body of laboratory observations suggests that when individuals are seen as violating a norm, others will sanction them – even without direct benefit to themselves (e.g. Gachter and Fehr 1999, Charness and Rabin 2002, Henrich et al. 2006). This helps us understand why norms can be long-lived in societies, and accords with economic theories of how decentralised group behaviour can be sustained (Kandori 1992, Ellison 1994, MacLeod 2007).

We suggest that the observability effects from the main experiment stem, at least in part, from an attempt to avoid social censure. However, other reputational mechanisms could potentially produce this pattern – for example, shame from appearing financially desperate enough to accept a wage cut. We therefore show positive evidence that people sanction workers who violate the wage norm.

Exercise 2: Will workers pay to punish those who take pay cuts?

Survey evidence suggests that 80% of workers believe that accepting a job below the prevailing wage will result in both monetary and social sanctions, the most common of which are excluding the worker from future job opportunities, and not speaking to the worker. 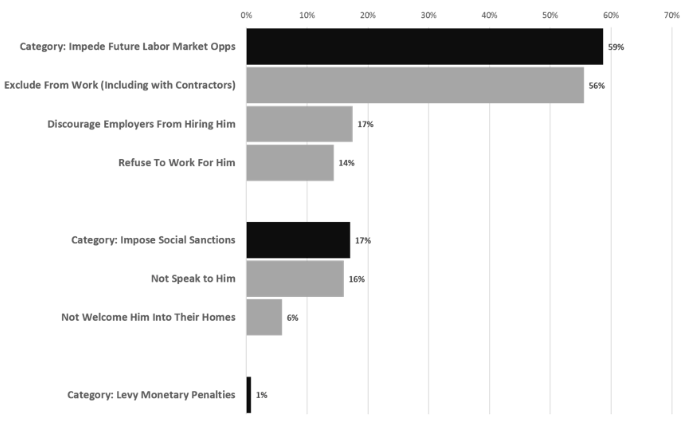 Notes: This figure graphs exit survey responses from 1,448 untreated holdout sample workers to the question: ``Suppose a worker accepts work at a rate lower than the prevailing wage. What will be the reaction of other workers?" Respondents were able to select as many responses as were applicable, and had the option of providing their own response. Responses were then aggregated into the categories shown in (a). In (b), the second question, ``If others try to convince him not to take the job, will he still do it?'' was asked of all respondents (regardless of their answer to the question in panel (a)).

We design a costly punishment game with a random subset of workers (“players”) who were not offered jobs. Each player is paired with an anonymous worker (who was offered a job), and both are given endowments of 100 rupees. The player is told whether his paired worker accepted a job at the prevailing wage or at a pay cut. The player can give up some of his endowment to reduce the endowment of his paired worker, providing a mechanism to punish the worker at a cost to himself.

Those who accepted a wage cut are punished 37% of the time, to the tune of 37% of average daily labour market earnings. In contrast, those who accept jobs at the prevailing wage are not punished.

Social norms in aggregate: Ability to enforce norms matters for the labour market

We provide one possible mechanism for this behaviour. In areas with less social cohesion, it may be harder to levy meaningful social sanctions: workers will be less socially integrated, potentially less reliant on each other (e.g. for leisure, marriage, or jobs), and information will flow less well through the network (making it harder to learn about and sanction deviations). Consequently, in areas with less social cohesion, wage floors may be more difficult to sustain. We adapt the test from Kaur (2019) and find a strong correlation between a proxy for social cohesion – caste homogeneity1 – across districts in India, and wage rigidity.

On one hand, social norms in the labour market might help workers coordinate to exert greater market power, extracting surplus from employers. They might also help workers to offset market power exerted by employers. On the other hand, wage floors may increase wages for the average worker, at the cost of increased involuntary unemployment.

We conduct a back-of-the-envelope calculation of gains to worker surplus following Lee and Saez (2012). We find that, under these admittedly strong assumptions, the market wage without the wage floor would be 7% lower, and, correspondingly, employment would be 7% higher. Workers benefit from the wage floor: workers’ surplus is 64% higher relative to the competitive equilibrium.

We acknowledge the assumptions that workers with the highest reservation wages are rationed first under the wage floor, and that employers do not behave monopsonistically, may not hold in these markets. There is scope for future research that explores collective behaviour among employers, and the distribution of surpluses among workers.

The forces we document have potential generality beyond our specific setting. Our proposed mechanism hinges on two features: a clearly defined norm (with observable violations) and a mechanism to impose social sanctions (in order to prevent individual deviations).

More broadly, the presence of cartel-like behaviour among decentralised individuals has been qualitatively observed in a range of markets, from NASDAQ traders and real estate agents in the US (Christie and Schultz 1994, Hsieh and Moretti 2003), to local traders and contractors in poor countries (Bergquist 2018, Houde et al. 2018). In these instances, anecdotal evidence suggests that the observability of the norms and the social ties between agents help sustain this behaviour.

Clark, G (1984), “Authority and efficiency: The labour market and the managerial revolution of the late nineteenth century,” The Journal of Economic History 44: 1069–1083.

Sticky wages and the Great Depression

16:00 in Online, United Kingdom and online